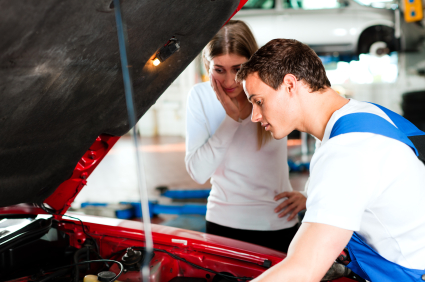 Our technicians at H & M Automotive Service & Repairs use the latest technology to not only tell you if there are any problems with your vehicle, but show you. If we find an issue, we’ll send you a photo of it to you for your review. At the end of every visit with H & M Automotive Service & Repairs you’ll receive a detailed report regarding the general health of your vehicle. Our #1 goal is to keep you safe on the road.

H&M Automotive is A+! From the minute I walked in the door, I was treated like royalty! They let me know about every part and service my car needed and didn’t do anything until I gave permission! They had me in and out very quickly and efficiently! I was never made to feel anything less than welcome; I knew they appreciated my business! They even have a company that will finance their services! A friend recommended them and I am so glad he did! I will return here when I need car repairs done and recommend them to everyone! Hope is AMAZING and Vinnie is great, too! The time I spent waiting on my car went by really quickly because of the two of them! Everyone I encountered there was just as nice and friendly as can be!!
“The Best“
Dainan Gibson

The only place to go, they are professional, courteous and very prompt w/ their service
“Excellent“
Charles Llewellyn

So far so good. They explain everything before they do the work.
“Quality Care“
Lester W Doss

Great job will return for future service on all my vehicles
“Excellent and fast“
Merrill T. Reese

Excellent work couple with excellent service that was also prompt and reasonably priced. Thanks for working me in on a short notice and taking good care of my needs.
“Couldn't be happier“
Buddy Buckley

Great customer service ! They prioritize your best interest and safety when it comes to repairs.
“I am satisfied“
James Lewis

They are friendly, fast and professional. I really enjoyed my experience with them. Glad they have payment plan to fit my budget. Being a widow I am done to one salary household repair to my car was very reasonable look forward to my next visit.
“Professional“
Kitee L Wilson

Wonderful service. Friendly and polite. They explained everything in detail and were just fabulous.
“Honest and efficient“
Daniel Thompson

Been doing business with them for several years and I have never been disappointed with the repairs and service. They are very professional, courteous and right on top of things.......
“Amazing“
Shawn Blount

Reliable and fair
“The best“
Barry A Erwing

The best ever!
“Honest and fair“
Clint Sutton

It's a good honest place
“Quick and timely“
Mary Page

I would tell them that they are trustworthy and efficient.
“Reliable“
Heidi gibson

They do a very fair and professional job
“Great team“
Lee

They did the job for the quoted estimate. We all have been to places where they try to get more money out of you. The front end alignment drove wonderful. They also have excellent google web search reviews also. Would go back again.
“Very impressed“
Marie orr

I was told car was ready on Friday. I set-up an Uber for a ride, ten minutes later I got a call saying there was a problem. I was told something had to be turned 180 degrees. I was told it would be ready Monday. They open at 8 am. I call at almost 12pm, and check on car. I was told the first hour they do inspections, but my car still hadnt been in shop yet. I was told it should be ready sometime today. Jist confused how some part was put on backwards or wrong, or something. Why was my car not still in shop from Friday? Why wasnt it the priority Monday? The payment was taken Friday, this survey was sent Friday. I just want my car, not playing a waiting game. Finally get my car monday evening around 5:30. I noticed my power seat controls were missing and a bag of change I had was missing also. I would not recommend this shop, something shady is going on there.
“impeccable service“
Joseph Anderson

I recommend them all the time to friends and coworkers.
“Excellent“
Cody lutton

I would highly recommend them as competent, competitive and friendly.
“Nice people“
Amy Mallinson

I wouldn’t go anywhere else. You are my people.
“Recommend“
Vicky Shearin

Excellent customer service, reasonable and reliable. I recommend them to everyone I know.
“Go there“
Raymond Blanchet

The most straight forward honest shop I have ever encountered.
“Very knowledgeable“
T Trovato

The staff is very knowledgeable and really makes the customer feel comfortable, which was very important to me. Nick and Vinny answered very question I had and kept their word. I would definitely recommend them.
“Exceptional service“
Catherine F. Walker

I have recommended H&M to friends and neighbors. Work is done well, and shop owner is trustworthy.
“Reliable“
Brian Clark

H&M does high quality work quickly and at a fair price.
“The best“
Max Sonnino

I would always tell them that H&M Automotive is amazing and well worth the price.
“Very impressed“
Jose Montoya

Very professional and thorough in their repairs.
“Couldn't be happier“
Rita Kehlenbeck

These guys are amazing they have done previous work (replaced engine) For me and continue to service my suburban as I request.
“Fair and quality work“
Elizabeth Salazar

I would tell them this is the place they need to go get any auto work done!
“Honest“
Helen Biel

Efficient, know what they are doing and friendly. Very pleased. And also nice to see handsome Nick.
“Knowledgeable“
Forde lowery

I highly recommend this place for service because of their excellent customer service, family environment, and extremely high level of maintenance and support they provide to my vehicle.
“Top notch“
John Krawczyk

It is top notch.
“The Best“
Bob Bellis

The crew at H&M are extremely knowledgeable, helpful, trustworthy and customer oriented - I will go no where else to have my vehicle serviced!
“Outstanding“
Thomas Hill

They would do a good and honest job.
“the BEST“
Ed Riggle

Great place. I love the text that includes pictures about my car service. Great communication about everything. Fast service. I have a hard time finding a place I feel I can trust, but I feel good about H&M
“Problem resolved!“
Karen Ricker

My husband and I have been going to H&M for almost 10 years (and 4 different cars!) and have always received great service at fair prices. Besides taking care of whatever the immediate problem is, they are good about pointing out work that potentially needs to be done, but they are NEVER pushy about it. On this particular visit I really appreciated the fact that I had made an appointment and they honored that appointment time (unlike the dealership!)
“Very knowledgeable“
Butch Hubbard

I have taken my vehicle here since they opened. Great customer service, very knowledgeable, quality parts and reasonably priced. Nic, David and Vinnie always make recommendations based on safety and necessity. They are not the cheapest in town, but when it comes to my family’s safety I trust them.
“Outstanding!“
Jim Slate

Excellent quality of work and customer service, long as they’re in business i will take every car of mines to them.
“A great job“
Jessica Winters

They do an awesome job! Friendly customer service and my car was in an out so fast!
“Great Place“
Vickie Nellum

This shop is a great place to have your vehicle serviced.
“A family business“
Brad Moses

H & M Automotive is amazing all around. Friendly staff, and the work they doing is incredible.
“Fair and quality work“
Keith Rowe

Those guys know their business and work hard to gain a customer for life with every transaction. I would recommend them for all of your vehicle repair needs.
“Prompt service“
Dave Stanley

That I think they are awesome and trustworthy. I learned years ago to go to a family owned business because their bread and butter requires them to do good work. Chains don’t care. Vinny seems to truly care. They are now my place to go.
“Nobody else touches our Honda“
Stanley Greer

I highly recommend them for their honest assessments and their workmanship. Plus everyone I had dealings with there were extremely friendly and helpful. I hate to see them move to Norfolk. But they are so popular and busy that they need the extra room for customer parking.
“Efficient, professional, and friendly“
Peter Mather

Go there without hesitation.
“Couldn't be happier“
Fredrick Clark

They do the work in a timely manner that can be trusted. Very transparent and communicative, explaining the details of his inspection and the appropriate actions needed.
“Good Service“
Freddy Fernandes

You have a good team and Vinny is really good !
“Excellent“
Mark A Torres

Excellent in all areas! Simple appointment process, got my car in and immediately diagnosed the issue. Ordered the part, with best price for original part. Scheduled date for installation, and did repair in minimal time.
“Quick Service“
Don hover

Service was great and on time,
“I appreciate your efforts“
Tyler Hillman

These guys are good to go! They take great care of their customers and really go the extra mile to do the right job and don’t cut corners.
“Great job!“
John Jeffcoat

Great job! Straight shooters who are upfront with what Needs to be done at a fair price.
“Quick Service“
Thaddeus Sykes

Quick fast and will work with you
“Highly recommend“
Becky Rhew